Walking in the snow

From a series of ‘Thirty six poets’, each with a poem from the eleventh-century anthology Thirty six poet immortals (Sanjûrokkasen) inscribed at the top in a stylised cloud, and illustrated in a modern setting below. Many were lavishly printed on thick paper. Here the paper was embossed with a block printed without ink to create three-dimensional ridges of snow.

The figures are dressed for snow: high wooden clogs (geta), split-toed linen socks (tabi), and ‘snake’s-eye’ pattern umbrellas (janome). The maid’s clogs are plain wood, while her mistress wears black lacquered clogs and a ‘high-priest’ hood (okôso zukin) for winter. The maid carries a lantern lit by glow-worms (fireflies). They walk by the Sao River in the Nara area, which was traditionally associated with fireflies and plovers. These associations are reflected in the imagery of the poem on the print by Ki no Tomonori (active c.850-904):

When evening falls
and the river-breeze begins to blow
over the sandy bed of Sao river,
how the plovers twitter
and cry after their mates! 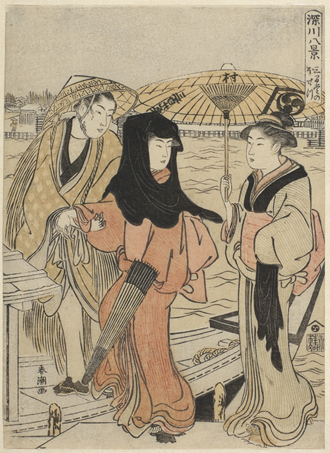 From the series ‘Eight views of Fukagawa’ (Fukagawa hakkei) published by Eijudô, c.1788-90.

Sets of eight prints (hakkei) with other locations substituted for the traditional ‘Eight views of Ômi’ always included a scene of evening snow, here set in Fukagawa, east of the Sumida river in Edo (present-day Tokyo). The title probably refers to Fukagawa’s unlicensed pleasure quarter, known as Sangendô after the Hall of thirty-three bays (Sanjûsangendô), built in Fukagawa in 1642 as a replica of a temple of the same name in Kyoto. Fukagawa was reached by a series of bridges or by boat from central Edo.

A Tatsumi (‘dragon-serpent’, meaning southeast) geisha – the unlicensed but fashionable geisha of Fukagawa – wears black lacquered clogs (geta) and carries a folded ‘snake’s-eye’ umbrella (janome). Her attendant wears plain wooden clogs, and holds a simple umbrella (bangasa) with the rental number ‘320’, but with its other trademarks replaced by characters identifying the publisher of this print. The boatman wearing a straw cape (mino) for the snow.

Part of the alluring chic (iki) of Tatsumi geisha was to forego the split-toed socks (tabi) worn by Yoshiwara geisha in winter, and be seen barefoot in the snow. 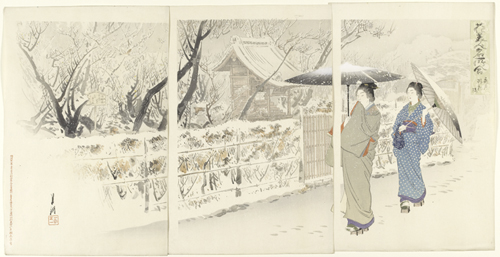 From the series ‘Comparison of beauties and flowers at famous places’ (Hana bijin meisho awase), published by Daikokuya, 1895.

The sleeping-dragon plum (garyô-ume) was named after its distinctive branches, which spread close to the ground and sprouted claw-like roots resembling the legs of a sleeping dragon. A famous example grew in the plum garden of Tenman Shrine in the Kameido area of Tokyo (Edo was renamed Toyko in 1868). Its far-spread branches entered the ground and re-emerged as new trunks, covering a large area that was fenced off to protect it, with a wooden signboard.

As the plum tree was also admired for the beauty and powerful fragrance of its double blossoms (‘so white when full in bloom as to drive off the darkness’, according to one guidebook), spring was the most obvious season to visit Kameido. But admiring the effect of snow was another favourite outing, and these women are well dressed for the snowy weather, with thick clothes and high clogs (geta). Although by this date the western-style silk and steel umbrella, known as a ‘bat umbrella’ (kômori-gasa), had become very fashionable in Tokyo, the women here carry traditional paper and bamboo umbrellas (wagasa).