Snow in the theatre 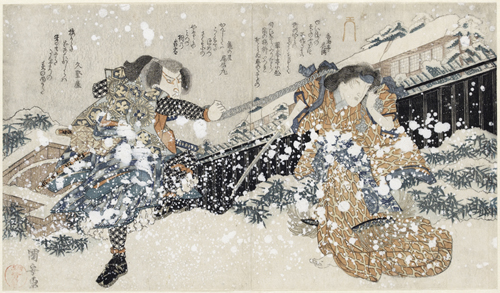 Commissioned by the Hisakataya poetry circle to mark the performance of ‘Palace in the East: the theatre New Year’ (Azuma dairi kabuki no shôgatsu) at Edo’s Ichimura theatre in 11/1825. Kikunojô (right) probably plays Hamahagi, wife of Iwai Goden, while Mitsugorô plays Onizuka Hyôgonosuke. The plot does not survive, but this fight scene in the snow was a great hit and is typical of the extravagant Kabuki history plays (jidaimono) included in the ‘face-showing’ (kaomise) programme, designed to show off star actors contracted for the new season. Fight scenes (tachimawari) were stylised, with languorous music and balletic choreography as protagonists moved from one stop-motion tableau to the next. Snow increased the visual spectacle, with the stage covered in strips of white ‘snow cloth’ (yuki nuno), setting off the bright costumes. Blows were mimed and movements given emphasis by beating wooden blocks (tsuke), which for snow scenes were muted with cloth padding. At the climax came what seemed like real snowfall – actually small pieces of paper shaken out of suspended ‘snow baskets’ (yuki kago).

In this print the drama is heightened by the way the white pigment has been flicked across the surface. 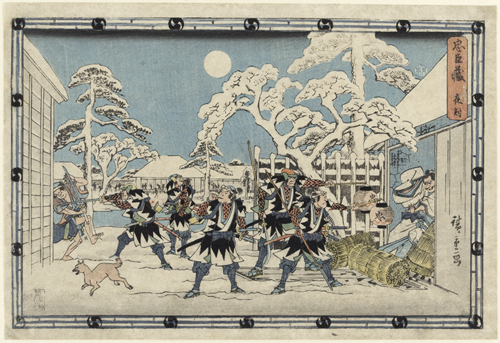 From the set of twelve prints depicting the eleven acts of the popular Kabuki revenge play ‘Treasury of Loyal Retainers’ (Chûshingura). The story tells of the revenge of forty-seven masterless samurai retainers (rônin) against Moronao, the villain who provoked their master into commiting ritual suicide (seppuku).

This is the famous scene in the final act in which the retainers attack Moronao’s castle on a snowy winter’s night. They finally discover him hiding in an outhouse used to store fuel - one of the retainers blows a whistle to signal the discovery. Moronao is subsequently forced to commit suicide.

Although not a depiction of a Kabuki stage or of Kabuki actors, this is nevertheless an illustration of the Kabuki story rather than the historical incident on which it was distantly based. In the actual play this crucial moment is not given as much prominence as one would expect: Moronao has no dialogue to speak whatsoever, he is only seen very briefly and he is played by a very minor actor at this point. Instead the climax is the series of fight scenes (tachimawari) in the snow that make up this final act: one of these can be seen in the left background. These are the most famous fight scenes in the snow in all Kabuki.