Snow in the city 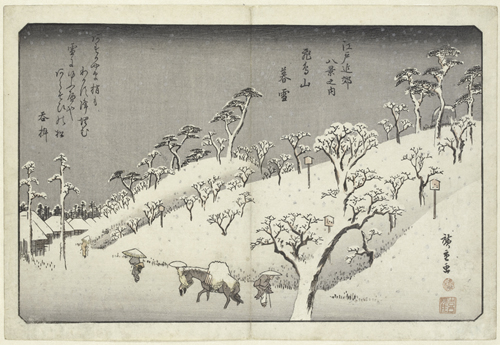 From the series ‘Eight views of the environs of Edo’ (Edo kinkô hakkei no uchi), commissioned around 1837 by Taihaidô Nomimasu from the publisher Sanoya Kihei for private distribution among his Taihaidô ‘crazy verse’ (kyôka) poetry group. Sanoya Kihei (Kikakudô) also published the print commercially, as here, with the three verses in the sky reduced to one, and with the addition of snowflakes brushed through a stencil onto the printed surface.

The idea of sets of eight prints (hakkei) derived from a traditional set of ‘Eight views of Ômi’, which was often recast by print designers in other locations, but always with associated moods (or times of day) carried over from the original set. Sets of eight always included a scene of snow that had lingered until evening.

Asukayama, a popular site for viewing blossom in the north of Edo, was planted with cherry trees by Shôgun Yoshimune and opened as a public park in 1737.

The remaining ‘crazy verse’ (kyôka) on this edition of the print is by Taihaidô Nomimasu himself:

The snow covers the signs warning against
breaking the cherry branches,
and also breaks them itself. 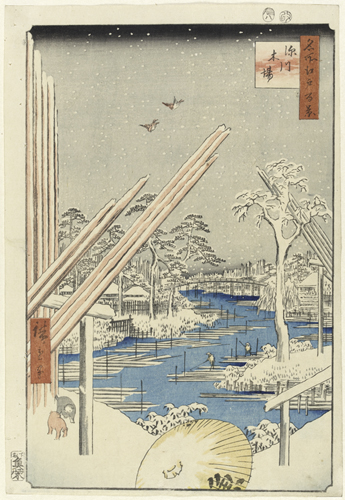 No. 106 from the series ‘One hundred famous views of Edo’ (Meisho Edo hyakkei), published by Uoei in 1856-8. The set ran to 119 prints (several designed by Hiroshige II) and was divided into seasonal sections. This was one of the snow scenes in the winter section

The Fukagawa timber yards were of crucial economic importance in Edo, the world’s largest wooden city. After the great fire of 1641, which destroyed not only many houses but supplies of timber for rebuilding, Edo’s lumberyards were relocated to the Fukagawa district east of the Sumida River. The site was officially christened Fukagawa Kiba (‘wood place’) in 1703.

Timber was stored mainly in ponds with connecting canals. For transportation it was lashed together to form rafts that were poled by the loggers (kawanami), two of whom can be seen in this print wearing straw capes (mino) and hats (kasa) for the snowy weather. Other signs of life braving the cold include two dogs, two sparrows, and the inexpensive umbrella (bangasa) in the foreground, with the umbrella maker or hirer’s trade-name replaced with the print publisher’s name.

An alternative, probably earlier, printing has an additional wisp of cloud and a more elaborately coloured cartouche. 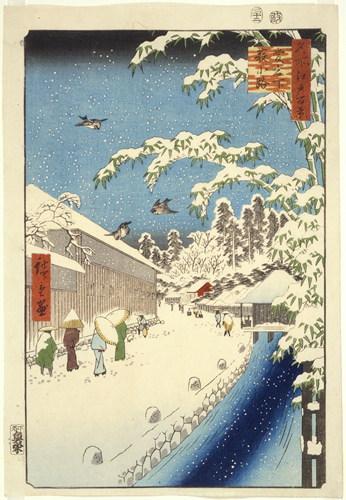 No. 112 from the winter section of the series ‘One hundred famous views of Edo’ (Meisho Edo hyakkei), published by Uoei in 1856-8. The set ran to 119 prints (several designed by Hiroshige II).

This clump of bamboo was a well-known landmark in Edo (present-day Tokyo). It screened the mansion of Kato, feudal lord (daimyô) of Minakuchi, and provided the name of Yabu (‘thicket’) lane. The distant red gate leads up the hill to Atago Shrine. On the right a guardhouse spans Sakuragawa drainage channel. Across the street is the mansion of Hijikata, feudal lord (daimyô) of Komono.

Hiroshige uses the snow to set off the bright colours, which together with the jagged pattern of snow on bamboo, the fluttering sparrows, and the variety of umbrellas, creates a sense of business in the urban scene. One of the figures uses their umbrella half-closed – a common trick to gain better shelter from the falling snow. Sparrows were often combined with snow and bamboo in pictures, including prints by Hiroshige that featured them as the main subject.

An alternative, probably earlier, printing has more elaborate patterning in the title cartouche. 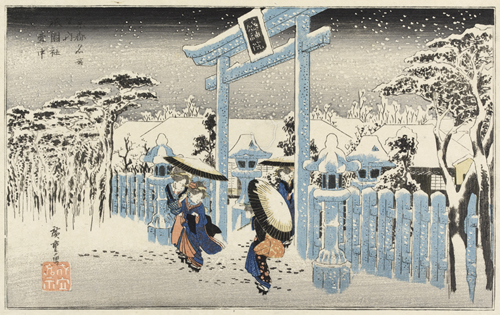 From the series ‘Famous views in Kyoto’ (Kyoto meisho no uchi), first published 1834 by Mitaya Kihachi’s firm Eisendô. This impression is from the reissue without a publisher’s name. The blocks are slightly worn and the shading slightly simplified. In the first edition the roofs of the buildings were shaded grey at the top.

Four geisha are seen in front of the stone entrance gate (torii) of Kanshin-in shrine in the Gion district of Kyoto. They are wearing tall clogs (geta), carrying ‘snake’s-eye’ umbrellas (janome), and hitching up their kimonos to keep them from the snow.

Gion developed as a pleasure quarter in front of Kanshin-in (now called Yasaka-jinja) to accommodate the needs of travellers and visitors to the shrine, becoming one of the best-known geisha districts in Japan. Geisha (‘skilled persons’), locally called geiko (‘women of the arts’), were employed as hostesses, musicians and dancers; as distinct from prostitutes (yujô), they did not usually offer sexual services. Geisha would have been a common sight around the shrine in the evening as they made their way to parties in the houses (machiya) and teahouses (ochaya) of Gion, dressed up in their finery. 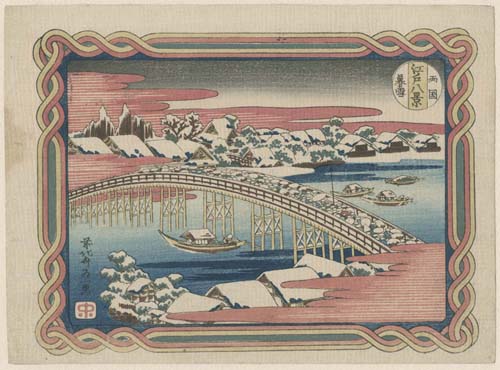 From the series ‘Eight views of Edo’ (Edo hakkei), published by Akamatsuya Shôtarô, c.1833. In the use of borders, it recalls two earlier small-format sets of eight views – one of Edo, the other of Ômi – that Hokusai designed c.1800-05 in imitation of Dutch engravings etchings. Here, however, the borders are more elaborate and abstract than in the earlier prints, where the borders imitated the appearance of European frames.

The idea of sets of eight prints (hakkei) derived from a traditional set of ‘Eight views of Ômi’, which was often recast by print designers in other locations, but always with associated moods (or times of day) carried over from the original set. Sets of eight always included a scene of snow that had lingered until evening.

The locations in this set differ slightly from Hokusai’s other sets of eight views of Edo. Ryogoku Bridge was one of the liveliest places in Edo, with theatres, side-shows, archery-galleries, firework-displays and other entertainments clustered at either end. This print shows it crowded even in deepest winter.