Looking out at snow 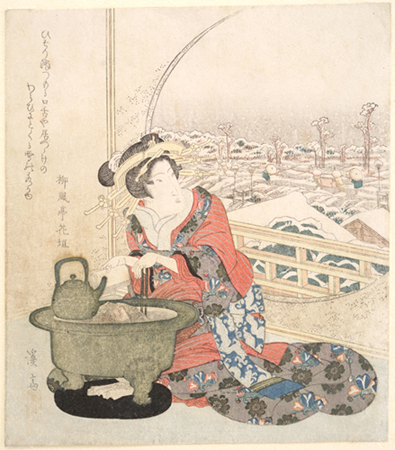 The enclosed Yoshiwara pleasure quarter was built away from downtown Edo and approached by a mile-long path through rice paddies on top of the Nihon embankment (Nihonzutsumi). The Yoshiwara was designated as the officially licensed red-light area in 1620, although it was only moved here in 1657.

A fashionably dressed Yoshiwara courtesan sits by a brazier with ‘lion-head’ feet (shigami hibachi) in her upstairs room in an upmarket brothel. She watches as her wealthy client leaves early in the morning, carried back along the embankment in a palanquin. Although not normally encouraged to stay the night unless they were especially wealthy or a special lover, clients might pay an extra fee to do so if it snowed. The papers under the brazier may be love letters.

Pairs of broom-like sticks set up beside water-barrels along the embankment served as fire-extinguishers.

Because of an overnight snowfall
her pouting and sulking client
stayed the night with her,
and their quarrel melted into laughter
like snow into water. 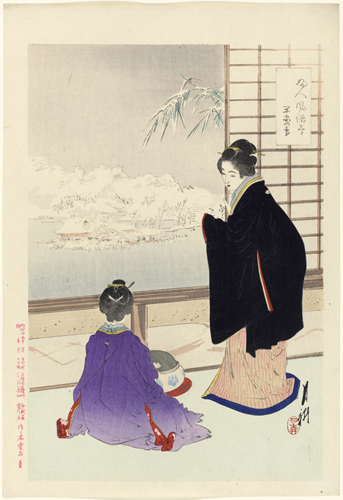 Contemplating the snow from inside
Kanka no yuki

From the series ‘Manners and Customs of Women’ (Fujin fûzoku tsukushi) published by Sasaki Toyokichi in 1891-2.

Gekko depicted the subject of women gazing out at the snow from inside on more than one occasion. While the standing woman points to something outside her companion kneels by a portable charcoal brazier to counteract the chill from the open window.

The vivid, slightly acid purple and pink are typical of colours used in the Meiji period (1868-1912), when synthetic dyes became available for printmaking. The relative lack of colour in the landscape through the window emphasises the feeling of cold outside.

The inclusion of a prominent branch of snow on evergreen bamboo reflected a relatively common sight in winter, but it was also an auspicious motif in painting and a pattern used in the decorative arts. It also served as a metaphor in poetry: 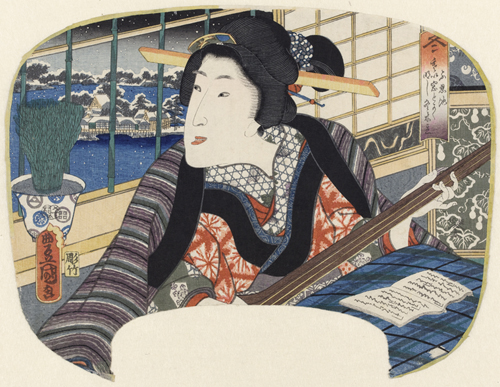 Colour print from woodblocks. Uchiwa format. Block-cutter: Yokokawa Takejirô. Publisher: Jôshûya Kinzô. 1858.
Part of the Messel-Rosse fan collection given by the Friends of the Fitzwilliam Museum with the assistance of the National Heritage Memorial Fund 1985

From an untitled set of four prints depicting the four seasons in Edo locations, published by Jôshûya Kinzô in 1858. They were intended to be mounted as the type of non-folding fans called uchiwa. The remains of the yellow mounting paper round the edge of the prints, and faint indentations from the bamboo ribs of the support, show that this set was actually employed as fans. The series is notable for the way Kunisada has portrayed complex pictorial space in the awkward confines of the uchiwa format.

In this print for winter, a town (machi) geisha practices a ballad from the book open in front of her, while accompanying herself on the shamisen, a fretless plucked instrument with three strings. She is probably sitting in an upstairs room of the Kawachirô restaurant in Ueno, hired to entertain a party.

The view through the window shows the shrine to Benten, goddess of water, on the island constructed in the early Edo period (1603-1868) in Shinobazu Pond in imitation of Chikibu Island in Lake Biwa. This was part of an attempt by Tenkai, the Shôgun’s advisor, to replicate Kyoto and its surroundings in the area around Shinobazu Pond, which Tenkai considered analogous to Lake Biwa. 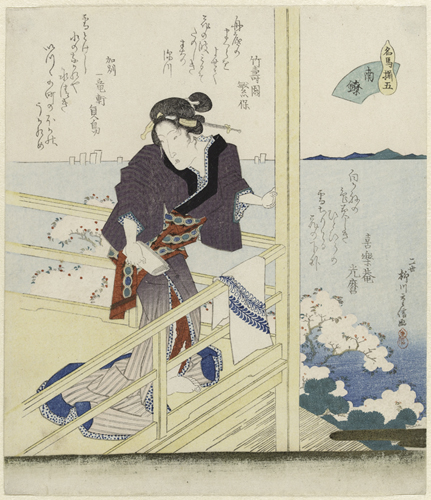 From the series ‘An array of excellent horses’ (Meiba zoroe) published for horse year 1834. Nanryô (‘Silver’) was the name of a legendary horse in Tales of Heike (Heike monogatari), and also the name of a coin.

A geisha is depicted on the balcony of a teahouse overlooking Edo Bay at Shinagawa, where the Tokaido road first met the sea south of Edo. Famous for cherry blossoms, Shinagawa was also an unlicensed pleasure quarter, where geisha were freer to offer sexual services than geisha in the Yoshiwara licensed quarter. She holds a wad of tissues, which, like the used towel, often signals in prints that sex is close at hand.

The first ‘crazy verse’ (kyôka) on the print plays with the similarity of blossoms to clusters of pristine snow – and petals to snowflakes – and this is reinforced by the depiction of snow-like blossoms on the trees, embossed into the surface of the paper without ink. Equating blossom with snow was a classic poetic metaphor, not least because outings to view blossom often took place while winter snow was still melting.

The final poem likens local Shinagawa prostitutes to streams of mountain snowmelt, contrasting them with prostitutes from ‘five streets’ Yoshiwara, whom the poet likens to fresh well water.

Captivating in beauty,
glowing silvery-white,
petals flutter down
to lay a blanket of snow
beneath the flowering trees.
– Kirakuan Mitsumaro

If not drawn from the fresh water
of wells along the ‘five streets’
are these other streetwalkers
floating down along streams
formed by the melting of snow?
– Hinanoya Haruko
(translations: John T. Carpenter)